Discussion of all digital SLR cameras under the Minolta and Konica Minolta brands
Forum rules
No more than three images or three external links allowed in any post or reply. Please trim quotations and do not include images in quotes unless essential.
Post Reply
First unread post • 12 posts • Page 1 of 1

I want to start with macro photography. Is the rinhflash of any use? I've read David's article regarding Sony, and in it he made a comment that the ringlight is not helpfull. Any expierence with this light?
Top

Are you looking for information regarding the Minolta ring flash (MFC-1000 controller with Macro Ring Flash 1200, or its analog counterpart) or the Sony ring light?

I use the MFC-1000 controller with Macro Ring Flash 1200 quite often and indeed for macro photography, it is quite useful. Still, it depends on what type of macro photography you want to do (insects, flower, objects, etc). It produces a flatter light than the Twin Flash (Minolta or Sony) but it easier to use (and less cumbersome than the twin with its arms and all). BUT it is almost impossible to find an MFC-1000 at a decent price nowadays

As for the ring light, I can't tell, I have never used it but I haven't heard of someone really using it.
David
---
α700 and too many lenses...
My Gallery
Top

The Sony unit is not able to freeze insect wing motion or flowers in wind etc. The original ring flash is of course very useful - with the updated controller for TTL.

Sony named the Ring Light correct. It's a ring light and not a Ring Flash as Minolta built a Mini Ring Flash. I have yet to figure out why Sony did this? I think the Sony does a good job with still subjects at very close distances.

Today I am using the Minolta 200 f/4 macro with the Minolta Twin Flash and Alien Bees Ring flash with excellent results.
Top

I think Sony may have found that the whole flash system was broken and not working as designed when they took over from Minolta. The reason I say this is that I hear the flashes on the 7d were not very good. and I saw on the A100 they weren't good either. the A700 comes in and theres an improvement and the next flashes that came out, that were truly Sony, work with the old protocol as well as a new protocol that re-introduced zones which hadn't been supported in a while. I think we are in the middle of a slow complete redesign of the flash system on both the bodies AND the flashes themselves. all the wile trying to maintain backward compatibility. it could be the ring flash just was either too much to deal with for such a specialized unit or was completely unworkable with the new protocols as it was designed.
PhotoclubAlpha
Shoot babies to fight infant eye cancer.

As ring flash/light interest me a lot, I thank you for providing the name. I didn't know about Alien Bees.
Though I already read and downloaded manuals, but still I have some questions.
1- Is it really usable handheld? As I see it weighs 1kg (approximately).
2- How close is it really usable, I mean not the power but the ease of use in close subjects?
3- How's the performance on, let's say, portraits?
Thanks Cameron
A99 + a7rII + Sony, Zeiss, Minolta, Rokinon and M42 lenses

I think Minolta knew quite well the flash system as it stood at the end of the film era and at the beginning of the digital age needed some tweaking here and there, but it was by no means broken, going by my experience with it anyway. While I was at DPR there were a lot of complaints about flash issues using a variety of bodies lenses and flashes, the bodies then were mainly the 7D, 5D and the A100.
In the main anyone using any of those bodies with a (D) lens and either a 5600HSD, 3600HSD, F56, F36 flash and ADI flash (direct flash) experienced (like me) very few problems, I have also used mine with TTL bounce without any problems 99% of the time as well. The problems (most of them) stemmed from either user error, wrong settings, or non ADI compatible lenses, third party lenses not compatible with the Minolta flash system, third party flashes also not compatible with the Minolta flash system, and or incorrect composition for taking a flash photo altogether, such as, foreground objects in the field of view that take up a significant amount of frame real-estate causing them too be overexposed, the background being exposed approximately ok, or conversely the foreground object exposed ok and the background underexposed, both sometimes included the main subject/s. Some of the errors were simply that the area and depth attempted, composition wise, would only be properly exposed by a couple of powerful off camera flashes carefully positioned and tested, and far beyond the scope of a single on camera flash, aside from these, there were a few apparently genuine and mysterious exposure issues, apart from mistakes. I came too the conclusion (based on my sometime errors and setup flubs) that it IS occasionally possible too "de-stabilize" the flash system for a short while, the only solution that I found was do a number of flash exposures that are within the range and capabilities of the system, as many as it takes until the system returns to normal, sometimes half dozen or more, but I allowed the system that small occasional idiosyncrasy...seeing as how I caused it anyway.
With regard to the Minolta Macro flash system, as far as I'm concerned it was working fine with the KM7D the KM5D and the A100, there was no need for Sony to scrap the Ringflash component and introduce a silly copy-stand light in it's place, and as Sony have never bothered to respond too any of my or anyone elses questions on the subject, none of us know exactly why they did it..it's a mystery.
A compadre of mine, Walter Knapp, a long time and accomplished macro shooter over at DPR, already had a Minolta Macro flash set (complete) and used it extensively on his KM7D (and later the A700) without any problems. When he heard that Minolta were closing down the camera div. he purchased another complete Minolta Macro flash set (controller, twin flash, and ring flash) as a backup...very wise, I should have purchased a set myself, and would have, if I'd known what Sony was going to do, it just never occurred to me that a camera company could be so stupid.
Greg
Top

As ring flash/light interest me a lot, I thank you for providing the name. I didn't know about Alien Bees.
Though I already read and downloaded manuals, but still I have some questions.
1- Is it really usable handheld? As I see it weighs 1kg (approximately).
2- How close is it really usable, I mean not the power but the ease of use in close subjects?
3- How's the performance on, let's say, portraits?
Thanks Cameron

Not to sound like some kind of spokes person for Alien Bees, this is my take on the strobe.

It's large and somewhat hard to use but I simply think the learning curb outweighs the results in both Macro and Portraiture. I use it in complete manual mode with the help of a light meter. Minolta hand held auto meter V F. Although I have the Minolta 50's and 100's macro, I have only used it with the 200 f/4 because I find this lens a little better for my work as to the others. 50cm focus distance is the min on the 200. I prefer to use it at 60cm on a tripod and in studio environment. I think it offers really great flat lighting.

For Portraiture its fine to use hand held. Lenses I have uses are the 35,85,100 and 135 Minolta and Sony alike. Alien Bees offers many attachments for this strobe. The gels offered are especially useful. The warming filter reminds me of the true skin tones we got from VPS and NPS 160 Color Film (used with the 700 and 900 and lenses with the "G" coatings.)

For many years, many of us looked at the ring flash for photos of a Grasshoppers Eyes. Today with the advent of very powerful ring flash like this it simply opens the opportunity to photograph subjects with the same lighting effects.

The Alien Bees Ring flash may not be the best ever made but I like to use it because it produces results.

What's in your camera bag that separates you from the rest of the 6 trillion photographers in the world?

The sigma ringflash is now available in the UK for the Sony fitting -I've seen it for £300. Although it has two tubes instead of 4 my understanding is that as opposed to turning them on or off whivh was the only option with the old Minolta ringflash you can set ratios. I think it may be slightly more powerful than the Minolta as well as having HSS according to website. It has adapters up to 77mm which is handy for the 24 -70 zeiss and others!
Last edited by caporip on Thu Mar 12, 2009 5:08 pm, edited 1 time in total.
Some days you eat the bear, other days the bear eats you....
My Flickr site:- http://www.flickr.com/photos/rb56/
Top

Thanks for the reply Cameron.
My principle need for the ring flash is in my job, shooting skin diseases that is.
I have the A700 and for macro the Sony 50/2.8
A99 + a7rII + Sony, Zeiss, Minolta, Rokinon and M42 lenses

henniebez wrote:I want to start with macro photography. Is the rinhflash of any use?

I posted this here a while ago if it is of any help.

Have just got the Sigma ringflash today and, as is traditional with any new piece of camera gear, have shot the dog with it:- 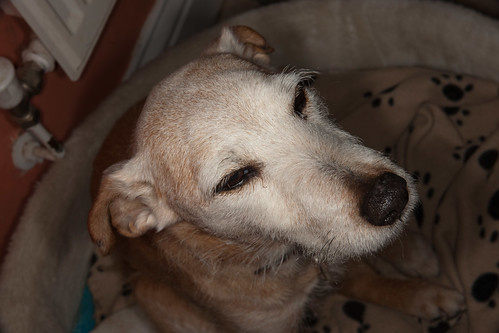 It seems albeit with only two tubes to be more flexible than the minolta version, with independent switching, ratio, multi etc and with only a few sample shots I have done so far i am pleased with the results.
Some days you eat the bear, other days the bear eats you....
My Flickr site:- http://www.flickr.com/photos/rb56/
Top
Post Reply
12 posts • Page 1 of 1