Future of A mount

Specifically for the discussion of the A-mount DSLR range
Forum rules
No more than three images or three external links allowed in any post or reply. Please trim quotations and do not include images in quotes unless essential.
Post Reply
First unread post • 187 posts

Dusty, the A99II is a PERFECT example of the blending of technologies from both the A mount and E mount lines. The overwhelming majority of features of this camera were developed for both types and there is very little completely new tech. Just improvements/evolution in the performance of the various components.

Classiccameras, the Sony E mount has been around since the first NEX. The full-frame version is relatively new, and lenses are being added regularly to build up the catalog. And while there are a limited number of high quality native lenses, ALL of the critical focal lengths ARE covered.

A serious A to B comparison with Panasonic gives the edge to Sony in terms of quality lenses. Olympus has the edge over both... but ahh; Sony owns a LARGE chunk of Olympus... so you could say that Oly is a division of Sony.

I hear what you say, but the E mount FE lenses are all expensive high end lenses for FF, the E mount APS-C lenses for NEX/A6000 camera as good as they were for lower pixel counts are not doing the 24mp sensors much justice, and that's according to several review sites and DxO. Even expensive E mount Zeiss APS-C glass under achieves for the money. Still its all academic as they all take pictures, but some better than others. I guess you pays your money and takes your choice. As for Oly lenses, totally agree but the older 4/3 ED glass such as the 14-54 F/2.8 and others are excellent lenses. Quite right, Sony has shares in Olympus and Oly now use Sony sensors, blimey who doesn't these days.
Top

CHOLLY wrote:Bakubo, Olympus, and Pentax owners manage to hang in and patiently wait... sometimes for YEARS... for the next product.

Samsung owners justifiably have a right to complain.

But Sony has NEVER said they were done with the A mount. Truth be told, there really was no reason to suspect that they would not continue introducing more A mount cameras and lenses.

My post that started this thread was to provide possibly a rational and logical business reason why Sony would keep the A mount alive for a long time in order to counter the constant angst on this and other forums. Also, as I said, over the years Sony has lost lots of A mount users because of concern. Sony has certainly sent mixed signals. You are just offering platitudes. It really would be more interesting if you had more thoughtful things to say, IMO. Also, introducing yourself would be nice and the polite thing to do.
Bakubo http://www.bakubo.com
Top

Dusty wrote:you started this thread by saying that there were a lot of A mount lenses out there, and the also talking about sharing components.

Maybe I read you wrong, but my reply is based on thinking that electronic components and design R&D can probably be shared between the mounts - you shouldn't need a whole new CPU just because the same/very similar sensor is in different bodies, even if one is E mount and one A. Granted, having electronic aperture instead may mean a different output signal goes to the lens, but in reality it's probably going from the CPU to a secondary component that's doing the actual activating. Likewise focus sensors could be shared, as well as other components.

The problem with the lens design, however, is that E mount lenses, with their very short flange distance, are more like rangefinder lenses that traditional SLR lenses in design. DK had a whole section on this somewhere that I'm too lazy to find!

I am still sort of confused about what you are saying in the context of this thread. I never said anything about sharing lens development. Is that what you think I said? Yes, the flange distance is different for the different Sony mounts. There are tons of existing A mount lenses in circulation and they are still being sold. The bodies though become out of date so having current and future A mount bodies is important to many people. Some may be content to use a KM 7D or A77II for the rest of their lives, but most people, probably, are hoping that there will be future A mount bodies too.

Dusty wrote:Sony is a big, rich, company, but like all companies they want to keep costs down and make profits. If A mount becomes unprofitable, it will go bye-bye!

Yes, I am pretty sure of that. Or sell it off.
Bakubo http://www.bakubo.com
Top

Sell it to who? it would be great if Konica/Minolta came back, Sony could sell to them, just a pipe dream, but I bet Minolta would do a much better job
Top

classiccameras wrote:Sell it to who? it would be great if Konica/Minolta came back, Sony could sell to them, just a pipe dream, but I bet Minolta would do a much better job

Well, you, Barry, and a few others here might be able to scrape up the funds to buy the A mount from Sony.

I'm rooting for you!

classiccameras wrote:Sell it to who? it would be great if Konica/Minolta came back, Sony could sell to them, just a pipe dream, but I bet Minolta would do a much better job

That failed... and Sony saw an opportunity to get into the DSLR market in a REAL way without having to duplicate the R&D.

The A100 was actually the LAST Minolta designed camera. And it was VERY advanced for the time. But sales didn't match canikon and Sony took a 2 track approach, starting development of it's OWN proprietary "NEX" line of products shortly after bolstering the A mount lineup.

Still, if you look back over the history of both Minolta/KM and Sony, the number of new models released has been constant since at least 1997 with a few ups and downs tossed in...
Top

Just a thought, but let all A Mount cameras revert back to Minolta logo and Sony stick with all the E mount stuff. Apparently Minolta or at least their old staff are still on Sony's books as a consultant designers. Yes, there has been a succession of models since the A100 some OK but quite a few lemons too. Mind you in the current climate of diminishing sales especially DSLR sales I doubt there is any commercial sense in that idea. Its like Contax/Yashica, an iconic name I would love to see back but it won't happen. The 2 big survivors are Canikon but their markets are now quite fragile. The only reason I bought into Sony A mount were all those Minolta legacy lenses, which I have 3, and they perform really well on my little A37, but they look stupid on my A6000 via adaptor
Top

Sony is a big enough company to be able to weather this trend away from hardware cameras in favor of smartphones.

There will always be serious photographers and they will always need serious gear. Sony plans to be there to capitalize on that market.
Top

classiccameras wrote:Yes, there has been a succession of models since the A100 some OK but quite a few lemons too.

I have had various Sony, KM, and Canon DSLRs -- 7 in total. My overall favorite is the A700 IF it had not had a manufacturing/design defect that Sony couldn't/wouldn't fix. I next got a Canon 60D which worked flawlessly, but it did not have IBIS. If the 60D had IBIS then it would have been my favorite. I still have my A700 packed away and if it had been as problem free as the 3 Canon DSLRs I owned I might still be using it.

Well, once m4/3 got good enough in 2012 with the E-M5 + good Sony 16mp sensor I probably would still have switched. I value smaller size/weight a lot for travel. It makes me chuckle when I think of the size/weight of the gear I used in places such as Egypt, Guatemala, Vietnam, etc. compared to what I carry for travel now.

classiccameras wrote:The 2 big survivors are Canikon but their markets are now quite fragile.

I was most impressed with my old Canon 550D, 18mp, for landscapes it had superb IQ and colour fitted with a 15-85 zoom, it wasn't that big or too heavy but nice to use. Not good for fast moving subjects/sport or Vid, but excellent for static subjects, it was this camera I traded for my first Sony, In some respects I wish I hadn't. Right now I have a love/hate relationship with Sony.
Top

bakubo wrote:Just last night I worked on a couple of 2009 A700 raw files in Lightroom. Not bad.

We were on a road trip in 2009 and driving down a country lane in Florida. I spied this very old car in a ramshackle barn that was about to collapse so I pulled over, got out, and went over to take this photo. I bet with just a bit of love and elbow grease you could get it running again.

Tool down the boulevards in your town with head held high. 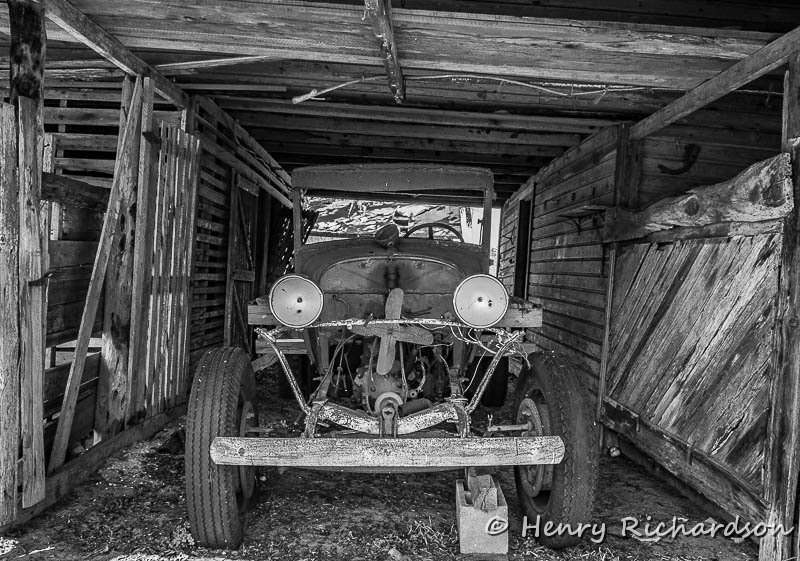 Super picture Henry, it would not have worked so well in colour, any idea of what car it was
Top

Some have said the A77II has been discontinued. If so maybe a new one is on the way. But, either way, it doesn't mean the A mount is dead, I think.
Bakubo http://www.bakubo.com
Top
Post Reply
187 posts

Users browsing this forum: No registered users and 5 guests