The software included in the £4850 Leica 9, with its 2500 ISO reasonable upper limit and 24 x 36mm frame suited to all those classic lenses including the Minolta CLE and Konica Hexar series, probably only removes CA and vignetting with identified Leica lenses - new optically mount-coded ones, or old ones with added codes. 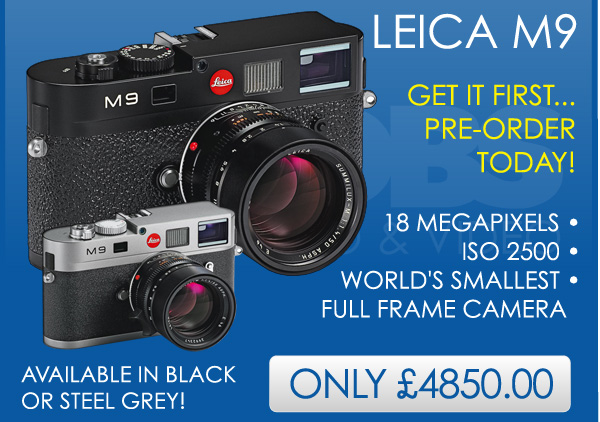 The first advert arrived BEFORE the official Leica press release.

We look forward to seeing the first pix taken with non-Leica M-mount glass, but sadly will not be buying this wonderful looking camera.

Well, I wanted a camera that took manual focus lenses, that had lots of MPs and was full frame.

I also wanted it to be an SLR and be reasonable in cost!

Here's hoping Cosina or Seagull can put that sensor in an old MD mount body at a reasonable price!

And I was thinking of asking to remove this section...

Looking at that thing, I just got a strange sensation of trying to flip the frame advance lever! Might take a little extra getting used to in a rangefinder!

Actually since Frank mentioned it and now Dusty. If seagull did come with a full frame rangefinder or even SLR that would use MD lenses I would be in for sure. I've had a lot of fun recently with my a700 and new SRT I'd love to have a digital version. and you know what it doesn't even have to have a screen. Chimping is convenient but it also seems to make me a little lazy. if I had to wait until I'm home to read the memory stick I think it would make me a better photographer. If I was shooting professionally I'd have an SLR not a rangefinder so are these reserved for rich amateurs?. This Leica is 10K US. if thats the price of admission then I'd b out for sure. IF Seagull could do it for 1000 or so I'm there and be happy to pay it.

Wow looking at the picture of those cameras in this thread the black one looks like one of those elcheapo plastic 135 roll film cameras you used to get at souvenir shops. they would work for a roll of film if you were lucky but were mostly toys. I'm sure it doesn't seem that way holding it but I'm a little surprised at the style of the ad.

I had a bunch of these as a kid. the wiki is right they came as prizes at carnivals. mine had a blue top and was marked tru-view. and i'm pretty sure it took 135. I remember the film would unroll off the unexposed side onto a spool on the exposed side that you would send out for developing. Then you would use the old spool as the take up for the next roll.
Last edited by Javelin on Thu Sep 10, 2009 4:52 am, edited 1 time in total.
PhotoclubAlpha
Shoot babies to fight infant eye cancer.

Well at Leica's price there is plenty of room for Cosina/Voigtlander to market a digital RF that will be bought by real photographers and not collectors and posers. it is very hard to see Leica these days as a photographic company.
Top

Javelin, if you want a rangefinder (film) camera that'll take you to the basics of shooting, find an old Argus C3 or C4! Very basic, but it's what I learned on (with hand held Weston light meter) when I was a kid. Pop brought it back from the Korean War.

Yep. All the fighting he did over there was with the Japanese vendors when on leave. As a medic he didn't carry a gun. He was a conscientious objector, but went to fulFILL HIS duty.

More gut than I have!

My first serious camera was a Minolta SRT101b, purchased in 1976 from RG Lewis in Holborn. I bought it in preference to the competition - Nikon, Olympus and Praktica (I don't recall Canon being a big name then but maybe they were) - because I had heard vague talk of Minolta glass being special and of linkages with Leica, then a more magical name than it is today. Unfortunately, I could not not then afford Minolta glass so it was a bit pointless - except that unwittingly I had bought one of the best made cameras of its day. I still have it though many have come and gone in the intervening years.

In more recent years I have been greatly fortunate in being able to indulge myself occasionally and the advent of full frame digital SLR made the a900 a temptation too great to pass up, particularly at a price in real terms (ie inflation adjusted) around half of what I paid for my treasured SRT101b in 1976, and thanks to the miracle of the internet and (flawed) miracle of eBay I have also been able to pick up amazing Minolta lenses at a fraction (in real terms) of their original cost. Oh, great joy!!

And now, bounty upon bounty, we have a full frame Leica M, the M9.

Concurrent with my loyalty to Minolta / Sony I have kept up with Leica, having owned an M6 and an MP along with two of their cheaper lenses (50/2 Summicron and 90/2.8 Elmarit M) and a number of Voigtlander M fits. Both the Leica camera bodies have been sold, the MP since the a900 acquisition, but I have hung on to the lenses (along with the cheaper but still excellent Voigtlander variants) and now that the M9 has come along I am mighty pleased at my foresight

Now the big question - do I buy an M9? While I owned a couple of film Ms as noted above I have hitherto eschewed the digital Ms because I am convinced that the strength of these rangefinders is in close range photography (ie up to 90mm) and even a 1.3x conversion factor ruined the wide-angle possibilities (except at astronomical expense for the Leica ultra-wides). The M8 was also flawed in a number of ways and the 8.2 was a silly and expensive attempt to address these.

There are still question marks. The brochure I have received (unrequested) from Leica is very vague. There is barely mention of bright-line frames but I presume these will be the same set as on the MP / M& /M6 etc 0.72 finders. The rear LCD is a pitiful 230,000 pixel 2.5" screen but Leica is clearly constrained to using this size screen on the M9 and, presumably, the higher resolution screens are not available for 2.5". No doubt there will be other issues but at least we will not have to use special IR filters on our lenses and we can now manually insert details for non-chipped older M lenses (although whether this will include ZM or VM lenses I am not sure).

But as a close up "shooter" who leaves the birds and balls to others this is the holy grail of photography arrived early.

Now I really want Leica to be around in the years to come. This is not just nostalgia. It looks to me as though they have left their complacency behind and we should really welcome their efforts. Rollei failed (sadly the final incarnation, Franke & Heidecke has just closed its doors) because of complacency in the digital age and insufficient investment. Leica for far too may years has rested on its laurels, content for too long to massage its paper-fine margins with pointless commemoration issues, and avoiding the central issue of the day, digitisation. It has relied on die-hard enthusiasts, (who are often rather defensive and prickly if the Leica forum is anything to go by) for it's relevance but not for its sales. But hopefully all that now has changed. I am not properly equipped to discuss the marvel of producing a full frame range finder with its close lens to image plane distance but many said it could not be done. Now Leica has done it, in constrained financial circumstances and without the mega-finance of the Japanese competition behind them.

That takes guts and a huge measure of self-belief. Will I support them? You bet I will if the reviews are positive and I can find the necessary lucre and I hope that real photo enthusiasts will as well. Good luck to them!
Top

David Kilpatrick wrote: We look forward to seeing the first pix taken with non-Leica M-mount glass, but sadly will not be buying this wonderful looking camera.
David

One day it would be lovely to own such a piece of German engineering - I have a lot of respect for Leica, having maintained their LMS Metrology equipment which is manufactured in Wetzlar. I had a great week there a few years ago being trained by the Leica engineers and also saw how they produce their microscope optics from raw glass to final test.
David
Top

One the reason I'm only shooting with Prime

. But there is some, lets say error in the video ... like the WB ... it is I think easier on D700 where there is dedicated button, but, the philosophy behind it though is interesting for feature maniac.

Still waiting for the Nex 7

Hi Frank, Interesting video. I got a used M8 and love it. There are of course times and occasions where a DSLR is much more suitable. Horses for courses.

Would have an M9 in instant if I could justify the cost. Maybe when the M10 comes out I may be able to pick up a used M9 at a more realistic price.
Last edited by braeside on Sun May 08, 2011 8:48 pm, edited 1 time in total.
David
Top

If less is more then he should love the Nex