All the funky stuff which turns your 550 gramme DSLR into a 5 kilo bag...
Post Reply
First unread post • 35 posts

Really, scientifically speaking the only thing which is to be blamed is the refractive index and extinction coefficients of materials (or complex refractive index). Refraction and reflection angles of light are defined by their refractive index and absorption is characterized by extinction coefficient. Hence, the problem is that most of the materials have different refractive indices for different wavelengths of electromagnetic wave spectrum. This means that the waves of different colors (or different wavelengths) propagate through the optical elements by different velocities depending on their property. This phenomena also called dispersion which leads to many unwanted effects in photography. That's why the manufacturers try to make the refractive index of the particular material as flat as possible along the all spectra. But the main problem here is that when a lens is designed for our cameras only the refractive indices of material in the visible region of spectra are being flattened and antireflective coatings are also made for visible spectar region particularly. For IR region reflection from the lens surface can be two or more times more let alone the propagation of waves through the complicated optical lens system.
My PhD thesis is mainly about the anti reflective coatings and actually about the all kind of nanoscaled coatings which have wide application. If you are interested I can represent some curves for AR coatings for visible and IR regions which I have calculated.
By the way now under my disposal I have one of the best spectrophotometers in my lab and I can measure the filters' transmittance and reflectance in a month, actually I can do many test.

Very impressive Armen. I had no idea that this was your particular area of deep expertise.

I feel silly having assumed it wasn't. Sorry..
It would be fun to see the lab you work in.. It has been a while since my last Physics class, but what you said makes sense. I would love to see some of those charts.. Thanks, John
If the last thing you remember hearing is somebody yelling 'CLEAR!!!', assume you've had a problem!!
a77, a700, a200, Minolta 8000i, NEX C3, NEX 5N and more lenses than my wife suspects!
Top

I am glad that what I wrote made sense, I am ready to answer to the questions which I am able.
I think it will be interesting to see some curves of reflection for different purposes. In all three curves reflectance are plotted upon the wavelength in nanometers. The first one I calculated is three layered Antireflective coating on the surface of glass or some organic materials which refractive indices are arround 1.5. It is visible that the reflection equals to zero from green (500nm) to red (700nm) in the blue region it has average 10 reflection average 8% which will bring undesirable effects I mentioned in my last post.
In the second graph an antireflectance effect occurs in the near IR region form 800-900nm. It is the same curve as in graph 3 only the plot regions are different. The two layered structure in the graph 3 is called dual band AR structure because it has min reflectances in 2 regions, one in visible and one in IR region. For example on Silicon substrate it is more easier to design and prepare antireflective coatings because Silicon's refractive index is 3.85 and there are more choices of parameters. If you have any questions please feel free to ask.
Regards
Armen 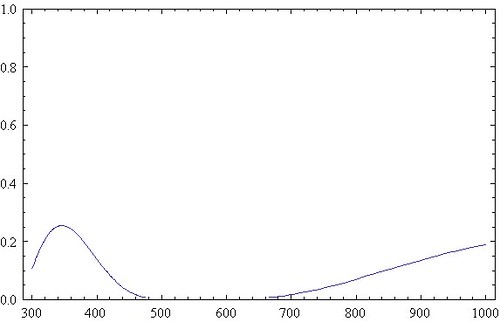 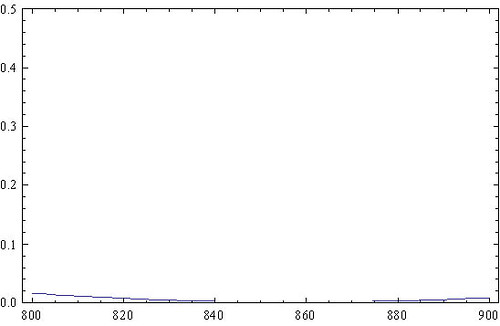 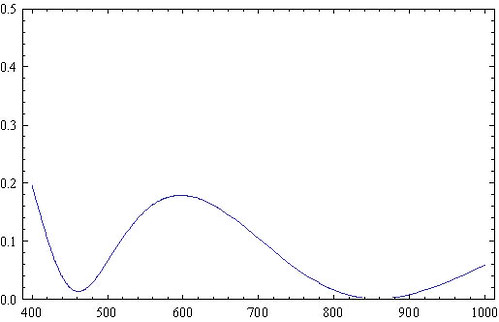 Thanks to the inspiration of John and Armen I am now the proud owner of a Cokin P 007 IR (720nm I think) filter. It cost me about £30 in the end. Today there was some sunshine and so I have been experimenting. 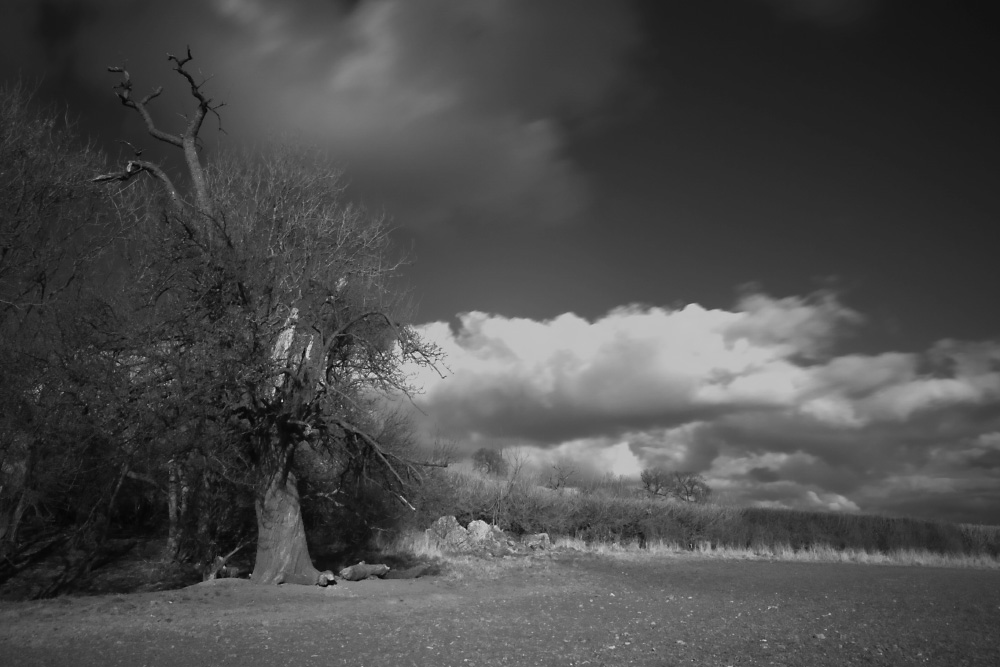 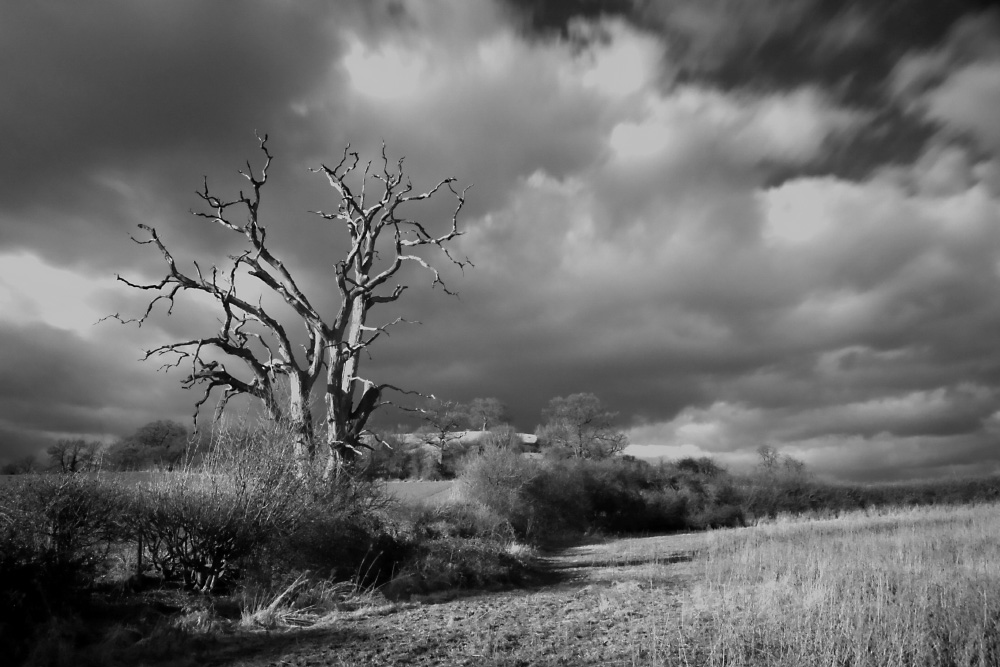 These are starting to get toward the "drama" of IR I have seen in some other examples, I hope, but I suspect that I will need to wait for green leaves on the trees for the real "effect". All comments and criticisms welcome - I am just learning. I have PP'd pretty much as I would for any B&W image.
Nex 5, Nex 6 (IR), A7M2, A99 and a bunch of lenses.
Top

Birma, I do not notice the IR effect

Armen Gharib wrote:By the way now under my disposal I have one of the best spectrophotometers in my lab and I can measure the filters' transmittance and reflectance in a month, actually I can do many test.
Armen

I would be really interested to see the spectrum from an LED light (joby gorillatorch or video LED panel).
For completeness a comparison to a tungsten bulb of a kind you would get in hot studio setups would
be interesting.
I know that old-style LEDs just gave out their colour based on the transitions, I read that the new white types have a phosphor coating.

Dr. Harout wrote:Birma, I do not notice the IR effect

but beautiful shots in B&W.

Useful feedback Doc. Perhaps I am looking for it too much - if it gets me now further than better B&W images then that is at least something

Dear Harvey I have just done experiments on the leds I have under my disposal.
The results were the same as I expected. Hereunder is represented a curve which includes the spectra of
red led (green line), blue led (magenta line), green led (blue line) and white led (red line).
Is it can be observed all the leds work purely on the principle of p-n junction transition emission except the white one.
Two picks can be observed for the white led. First pick is the same as in case of blue led. Hence, it can be assumed that
it is exactly the same blue led inside, I mean from the point of view of transition. The second wider pick is obtained because
of luminescent coating of led. The coating absorbs high energy blue emission (higher energy, less wavelength) and emits secondary in teh rest part of visible.
I am glad that you are interested in these things, please do not hesitate if there are some other questions. 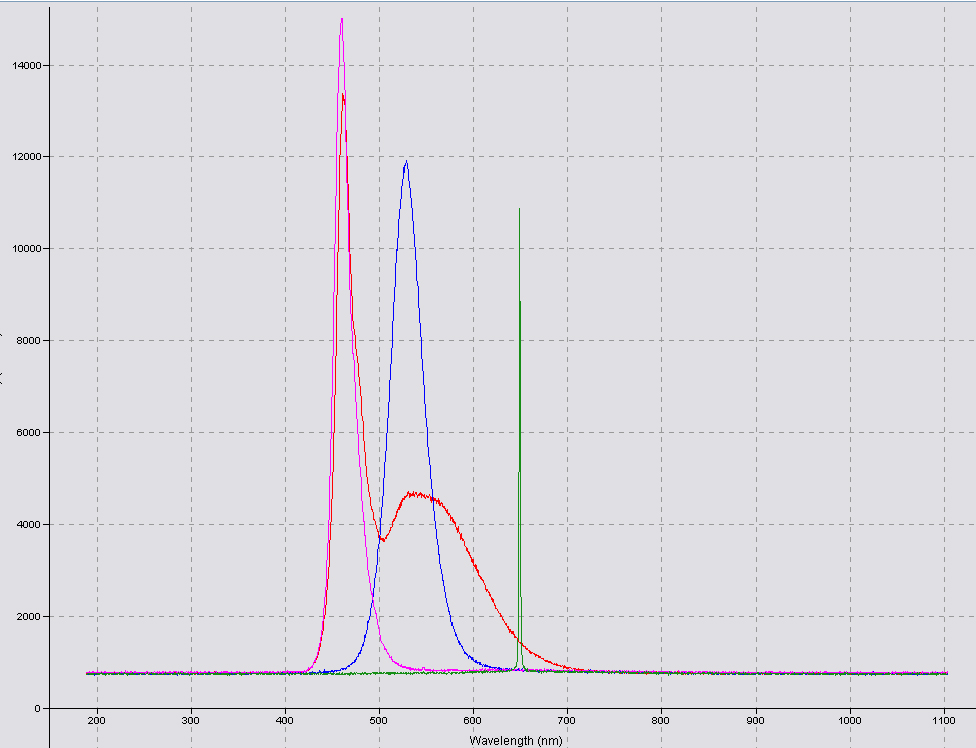 In this figure irradience of light emitting diods of different colors upon the light wavelength (color or energy) is represented.
Blue light is arround 400-500nm, green is after 500 nm up to 560 or 580, red is after until 740nm. White light is composition of all kinds of lights or dfferent energy emissions. Because led-s usually have narrow irradience hence these are more monochromatc white leds should be constructed on different pricnicples. But tehre is a way to obtain white lght by usind narrow emission leds or lasers. n this case red lght is corresponding to white light which shows a excitation in blue region (near 450 nm). When luminescent coating absorbs the high energy blue lights, electrons from higher energy states in that material fall to lower energy state which mean that some extra energy should be released (this process is occurring by resonance). This addtional energy's size is a size of light photon energy of visible spectra (lower and wider pick of red line).
The effect is the same as in luminescent lamps in daily use, only in that case gas Ar Neon or other gas emissions are absorbed and secondary radiated as a white light.
Doc jan I can consult you in some part of physical optics which is more interesting that geometrical.

Nice shots. I have had a look to the settings of your image and it has 8 second exposure which is still good for a700, I think you had a pretty good sun, hadn't you? By the way did you somehow modify your image by photoshop to obtain a B&W image? Because for 720 nm filter you couldn't obtain this effect.. BUt I really like the details, nice!!

With the IR filter on (and keeping aperture and focus from the 'test' shot) I roughly calculated 10 stops of exposure down and then took some shots to see how it looked. I tried to use the red historgram to judge a good exposuire (I guess all of the other colours are not so much use). I like the final B&W look and so for some shots I chose B&W scene selection so that I could see from the preview jpg what the shot looked like, and I found this better for judging focus etc. than the "red" only shot.

In PP (I use Elements 7 with ACR) I made very minor changes to exposure in ACR, and may be a slight levels adjustment. I then used the Elements "convert to B&W" function to give the monochrome effect I wanted. I started from the "vivid landscape" setting and then played with contrast and the red channel. Then it was just re-sizing and sharpen.

The day before I had tried some IR shots but it was a very dull day. I was at 30 second exposure with the IR filter on, and I had tried to increase ISO but this looked awful. I hoped for sunshine to try again and I was lucky yesterday

. When I get a chance I want to study some more examples of IR images to see what can be done. I am a bit concerned that I may be doing something wrong, or if I just need different subjects to get a better IR effect.
Nex 5, Nex 6 (IR), A7M2, A99 and a bunch of lenses.
Top

Dear Harvey I have just done experiments on the leds I have under my disposal.

Thanks very much! The "white" LED is very blue, particularly so if you compare against
daylight, and normal and daylight incandescent bulbs. See here for some GE bulb spectra.

Also there is quite a dip in the green but perhaps that is not something you will notice much with indoor shots.

Birma- The main problem with your two photos isn't your technique. It is the time of year. When all the foliage around the dead tree is green, then you will get the Woods effect. Dead wood, brown grass all have low IR reflectance. Wait until spring and you will notice a huge difference.
EDIT Sorry Birma- I didn't see the sentence at the bottom.....You are getting close.
As far as the technique I used in my tree shot, I shot RAW ISO 100 or 200 I'd have to look. Creative style B/W. I then played with the contrast, exposure, DRO in IDC to achieve the 'glow'. I am usually at about f7- f11, to negate focus difference, and I just count out the seconds with my manual release cable. (sorry I don't do it more precisely!) I'll post some others with the exposure data. I'm biding my time right now by scoping out locations for spring... Hope this helps- John
If the last thing you remember hearing is somebody yelling 'CLEAR!!!', assume you've had a problem!!
a77, a700, a200, Minolta 8000i, NEX C3, NEX 5N and more lenses than my wife suspects!
Top
Post Reply
35 posts

Return to “Tripods, bags and accessories”